The 68th Venice Film Festival is coming to an end as everyone is looking forward to the award presentation ceremony on 10 September. Hong Kong film A Simple Life which was screened earlier and received good reviews, it had another good news yesterday as The Ministry of Equal Opportunities had presented the Award for the Equal Opportunities to the film to commend it’s dedication to the females and the weak social groups. 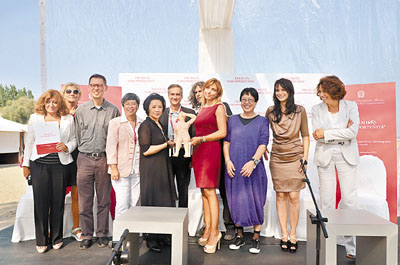 After the film’s premiere in Venice, the acting of Andy Lau and Deanie Ip had won loud applause, Deanie is also tipped to win the Best Actress award, with this new honor, the crew is delighted.

An excited Andy expressed: “With this good news, it would made everybody who’s inovolved in the film to be excited, it also shows that this film grabbed attention in this year’s festival, awaits more good news to come, also hope that the three birthday wishes that I made (A Simple Life to win Best Picture, Best Director and Best Actress) will come true.” Director Ann Hui who collected the award from Venice Film Festival chairman Macro Muller is equally delighted as she said: “This award gave us the confidence, many thanks to all the support given to A Simple Life, hope that Deanie could come out as winner of the Best Actress award.”

The Ministry of Equal Opportunities commended: “The Tao Jie housemaid character of Deanie Ip in the film represented female and weak social groups. Tao Jie came from a poor family, since young she became the maid of Roger’s family, but she did not despise herself and spend all her life to take care of Roger and his family. She was sent to the nursing home when she fall sick, but Roger still treated her like a family member and never gave up on her, brought her to her old home and attend premiere which show that woman and weak social groups are respected.”

According to the ratings of the 17 films screened during the festival, top of the chart is Roman Polanski’s Carnage with 8.0 points, A Simple Life being the highest ranked Chinese film at fifth with 7.3 points.

Film magazine Screen gave A Simple Life positive review, other than Deanie’s “natural acting not exaggerating”, its also said that her relationship with Andy is close, for audience of Hong Kong films, their collaboration would get bonus points. Another article in Variety agreed with the “heartwarming and touching” ending but feel that the film’s running time close to two hours, it suggested that the director could make it shorter despite there’s “nothing that can be edited off” for the film. Hollywood Reporter also has similar comments. It’s not sure if Ann Hui would received the same reception when the film is screened in Hong Kong.

In addition, Andy and Deanie were interviewed by cable television, Andy was interviewed with Cantonese for the first time. When talked about their tenth collaboration in films, Deanie sang praise of Andy: “I saw Andy had grown up, more detailed in his acting. I really loved him because he’s also hardworking!” As mother and son for numerous times, when asked what sort of collaboration they would like, Andy and Deanie quipped: “We can also be lovers!” This sentence made Deanie couldn’t stop laughing.