Andy was interviewed by ent.QQ.com, he exclaimed that after the shooting of Shaolin, his “anger” had decreased, although being a Buddhist for 20 years, he’s not a vegetarian because he had not attained enlightenment, but he still stayed in the temple for a few days each year.

Andy easily gave people a good feeling about him. There are many methods to make people have good feelings about you, Jackie Chan treat crew members with snacks, Chow Yun Fat used to play his tricks, for Andy, he also treat crew members with snacks but it’s not buying their hearts but he also made fun of himself, but people won’t feel that he’s playing tricks. Thus many people are saying that this man getting interesting as he ages.

In Shaolin, Andy is a general but transformed into a monk. Andy said that the film has affinity with Buddha and expressed that after the shooting of Shaolin, his anger has decreased. He appeared modest as since when he showed off his anger? 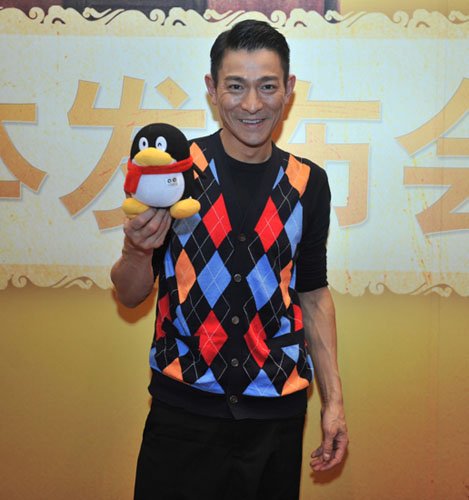 QQ: For the film, you learned 7-Star Fist, it was said that it hit with characters, comes naturally, I felt that its this way.

A: Nope, learn it three hours per day for three weeks. This is the basic of Shaolin kungfu, all new monks must learn it.

QQ: I feel that you put in a lot of feelings into the film.

A: In the past, people will feel that showing off your feelings is not acting, those who know how to act will keep his feelings. In this film, I return to become a normal person and not acting, its the life in the film, it not to present how good is my acting.

QQ: Other than 7-Star Fist, you do not have much fighting scenes.

A: Actually when I barged into Shaolin Temple when the film begins, we shot a fighting scene but was snipped. When I and Fan Bingbing being hit by Nicholas Tse, we also shot an fighting scene, like me fighting with the soldiers and Nicholas, but all had been snipped. 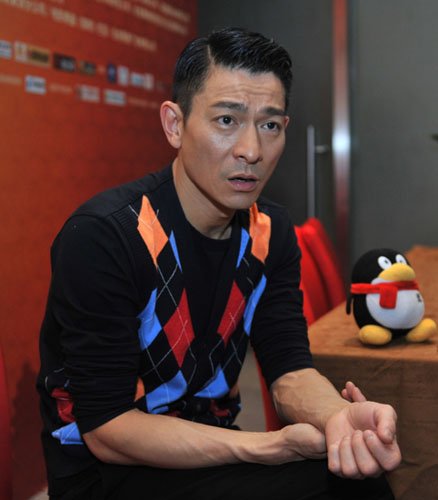 QQ: Why they were snipped?

A: Not required, like when barging into Shaolin Temple, I have a gun in hand, no need to fight, such things are not required, this is the character of my character. Even when I lecture Nicholas after I alight from my horse, people are using sticks, you’re using guns, it’s rude. But I could use my gun. The fighting scenes are not required, I don’t have the ability to resist, they have guns in their hands, I being pushed onto the floor and could not move, could only shout.

QQ: Did you suggested to the director that the scenes need to be snipped?

A: Nope, I did asked him, his reasons are the same as my thinking. Remember Infernal Affairs which I and Tony Leung Chiu Wai pointed guns to each other’s head, actually we thought of shooting a fighting scene until our guns dropped onto the floor. Then, I suggested to Andrew Lau that the fighting would not look good and the director accepted my suggestion.

QQ: Any disappointments with Shaolin?

QQ: You feel that martial arts will enlighten you?

A: The handling in films is rather simple, the process of changing is rather fruitful. For example, I killed my elder brother’s son in the opening, (QQ: The child appeared for a short while and disappear.) Actually we shot him again, among the refuge he found me whom had become a monk, he raise his sword and wanted to kill me. We shot him to be rather violent, then I knew that vengeance could transform an innocent child to a demon. I love this part, but it was snipped due to the film’s length.

QQ: Since the the shooting of Shaolin, did anyone enlighten you? 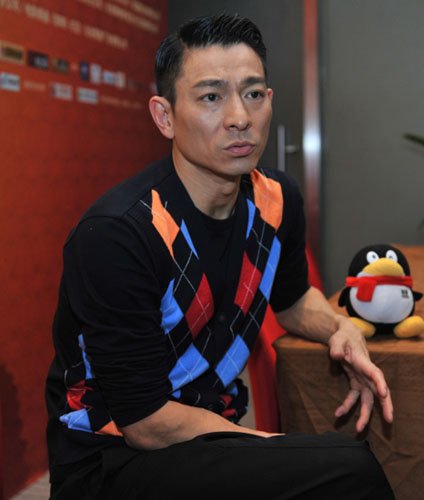 QQ: Are you currently learning this?

QQ: Are you a vegetarian?

A: I thought of it, but did have the determination to do it.

QQ: You really feel that after shooting this film, your anger had gone down?

QQ: But I feel that you had reached this stage earlier.

A: Actually nope. Before shooting, I specially go to the temple and stayed for 3 days to quiet down. In the past I would go to the temple to stay for a few days each year, it’s since a long time I did it. I specially went because of shooting this film, to quiet down but no enlightenment. When you asked of the Andy Lau of today, can you explain how to explain? I feel that it can’t be explain, I feel this is affinity. When you said that I’m a workaholic role model, actually in this job, who is not a workaholic, who always relax?

QQ: In the film, you are a general who can’t sleep if you did not kill your enemy, with such huge pressure in showbiz, can you sleep?

A: I did a recap of my past 30 years, I remember that there is only one day that I did not sleep, remember clearly of this day.

A: there was this day, one person told me that the concert that I arranged was not good, but the next day is the first day of the concert. That is the day.

QQ: A long time ago you are heavily in debt, can you sleep?

QQ: Did you have any planning for your life?

A: People would think I planned properly, actually I didn’t, let nature take its course. I think of it this way, if you work hard and did not get good results, it’s not my problem.

QQ: Are you worried that one day you would no longer be popular?

A: Nope, I was once not popular.

QQ: You are also a general in The Founding of a Party.

A: I’ve completed my shooting, although it’s just 4 scenes but different methods are used.