Among the anticipated cheers, Andy used ‘Zhong Guo Ren’ to officially begin the concert. Despite the previous day rain did lower the temperature, but Andy still performed as usual with fire as it warms up the whole Olympic Centre. 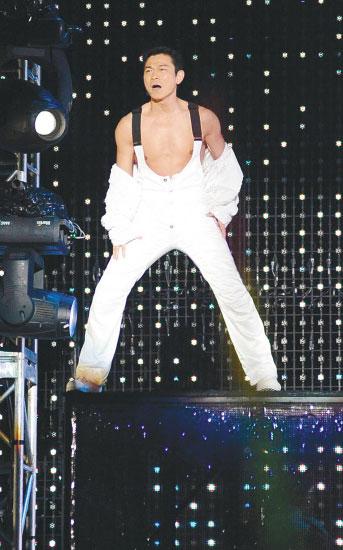 Being the superstar and his handsome image, it combined well with his songs to allow the audience to scream out loud, they held their light sticks to reply to their idol. After ‘Zhong Guo Ren’, he sang ‘Lang Ren Qing Ge’ and ‘Nan Ren Ku Ba Bu Shi Zui’. 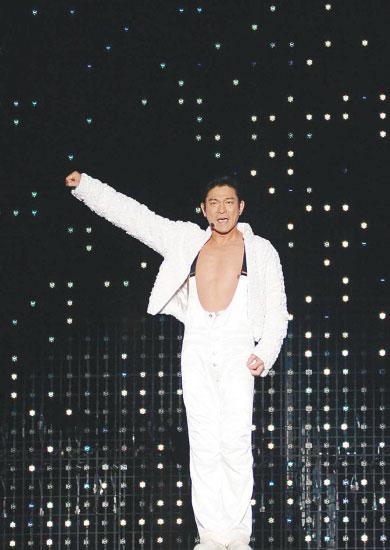 After the three opening songs, Andy first words to the audience was: “Are you happy? Do you know that I’m happy?” The audience replied him: “Happy!” Andy then continues: “It had been raining for these few days in Shenyang, I’m worried about today, luckily it did not disappoint me!” When Andy was thinking what to say next, the audience continued to scream, Andy then had to plea the audience: “Would you mind to quiet for a while, I can’t continue singing this way!” When the audience quiet down, Andy asked: “When I first entered showbiz some 20-30 years ago, do you know that I existed?” When the audience replied that they knew his existence, Andy then continued to sing ‘Ru Guo Ni Shi Wo De Chuan Shuo’, the audience did not screamed instead they sing along with him. They also continued to sing ‘Tian Yi’ and ‘Wang Qing Shui’ with him. This again bring the atmosphere of the concert to new heights. 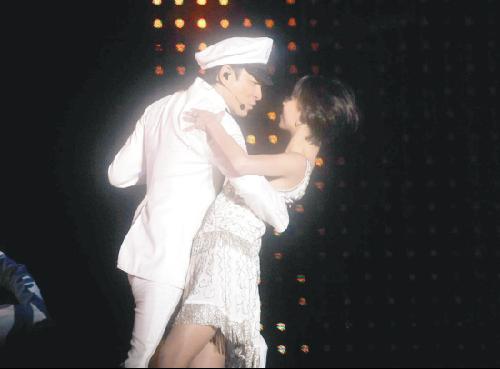 For every Andy’s concert, there will be dances and drama performance before each segment, there was no exception in Shengyang. When singing new song ‘Yi’, the main focus on the dance performance shifted to Andy as he sing and dance with two female dancers dressed in white and red respectively. 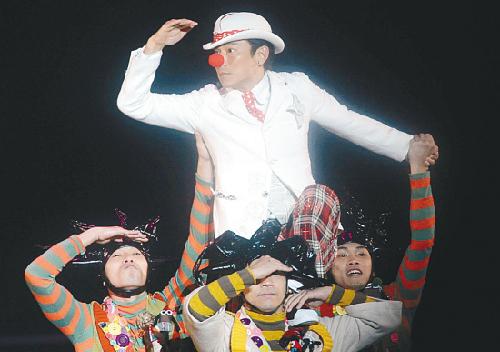 After a happy ending to the drama, Andy re-appeared on the stage dressed as a clown to sing ‘Ben Xiao Hai’. The concert entered “Our Time” segment. He sighed: “More than 20 years ago, a silly kid chose to come onto this stage, up till now, I need to thank everybody’s support. I always tell newcomers, if you work hard you will earn applause. “I can’t act?”; “I can’t sing?”, even I’m dressed as a clown, am I still handsome? Will you still love me?” Of course the audience replied “Yes!”. Full of smiles, Andy said: “Actually for the past 20 years, I always depended on my face. But after these 20 years, with all of you, I does not need to be a clown anymore.”

Andy continues: “Every faces tell me that all of you loved me very much, I have nothing to say to you, hope this friendship remains forever. Raised your right hand and we make an agreement, we will still be friends in our next life. In my next life, I will still be called Andy Lau!”

When Andy discover banner writing “diamond husband” and hear female fans cheering “husband”, Andy shake his hand and said: “I’m not your husband, there are so many of you, I can’t be your husband, I’m your big boss.”

The fourth segment was the Cowboy Weaver” segment, in order to be together with the girl he loved, the cowboy suffered a lot. When he was being tied up in mid air by the “demon” and pushed him against the wall, the “thump thump” sound effect worried the audience. Luckily, there was a happy ending as the couple was together in the end, with ‘Ai Ni Yi Wan Nian’, the audience can finally relaxed.

There was the touted “flying man” stunt where Andy “fly” towards the audience at the VIP seats. Many audience noticed that there were wires hanging in between the stage as all are excited when he would “fly towards them”. When Andox and Box appeared, all attention were all them, Andy suddenly appeared in mid-air as he stand on a platform which only allow one person to stand as he “flew” towards the audience. Although safety precautions were taken, but the fans were still worried for him. One fan exclaimed: “It’s too dangerous, Andy is indeed professional.”

The whole kept has surprises throughout, no matter its visual, hearing or mental, it bring huge effect to the fans. It should be the most fortunate and excited night for all fans in Shenyang. When Andy asked: “Is this your most memorable concert?” All the audience answered: “Yes!”.