Chongqing fans would get to hear Andy Lau sing at the Olympic Center on 27 May 2011, he touched down in Chongqing on 26 May afternoon in his private jet plane, he immediately board the awaiting car and headed to his hotel. With the concert round the corner, to preserve his energy, he would stay in his hotel room to rest. According to the reporter’s understanding, the images of his concert two years ago still remained in his mind, for this concert, he specially prepared the concert’s theme song and close to 30 classic hits to perform and have a ten thousands sing along with the fans. 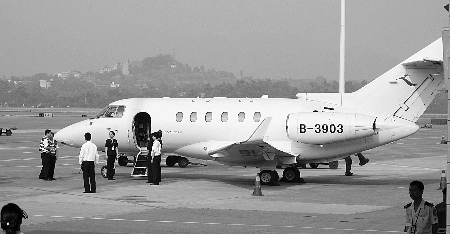 Actually this is not the first time Andy flew to Chongqing with his private jet as he also did it for his 2009 concert. The reporter found out that Andy booked the executive airplane from Deer Jet which fly him and his 10 person entourage from Shenzhen to Chongqing. It is understand that the private jet is charged hourly at ￥50,900 per hour with some discount. Despite the high cost, but pretty humanize price. Although Andy only will be staying in Chongqing for two days, there would be no charges when the plane is not flying, thus calculating with the estimation of two hours, his trip to Chongqing would cost him around ￥200,000. 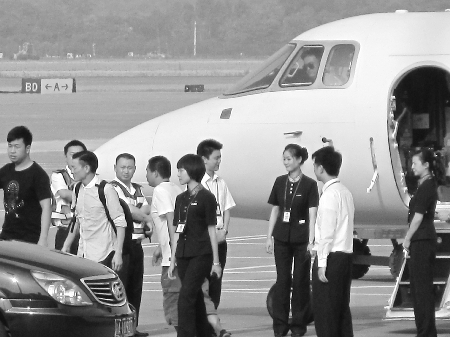 To prevent being disturbed by outsider, other than flying with a private jet, his schedule is also kept secret, everything had been arranged by his management company, the concert committee played no part. Other than not revealing his flight arrival time, he could still change his arrival time. Around 5pm, one netizen managed to spot and photograph a jet plane carrying Andy landing at the airport. Andy was wearing a blue shirt and carrying a haversack when he walked down from the jet plane’s stairs with a smile on his face. He immediately board the awaiting car which drove him to his hotel. The car plate of the vehicle was also specially prepared as it says “IU927” which symbolize “I love you”, “927” is Andy’s birthday.

The reporter also went to the hotel that Andy would be staying. The reporter found out that Andy picked a 5-stars hotel near South Garden, he would be staying in the presidental suite which cost ￥38888 per night. To prevent any disturbance, he booked the whole floor. When the reporter arrived at the hotel, other than an “out-of-order” sign at the lift, all lifts could not reached the 27th floor, even the staircase from the 26 floor to the 27 floor had been locked. The reporter managed to sneak onto the 27 floor, although Andy had yet reached the hotel but one security guard was already stationed there. 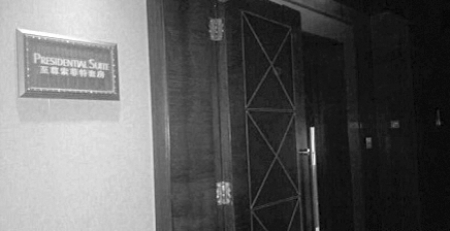 The reporter found out that Andy’s meals are also arranged by the hotel, he could order his meals in his room. Although Chongqing is famous for its steamboat, but to protect his vocal, he would eat bland. There are many bottles of mineral water in the room, a humidifier was also prepared for him, all these preparations are to allow Andy to be in perfect condition to sing for his fans. Despite the simplicity, Andy stressed on privacy as it would be difficult for hotel staffs to enter Andy’s room as all tasks would be handled by his crew members, the hotel only need to accommodate his requests. It can be seen that Andy wanted to be an in-house guy for this trip. 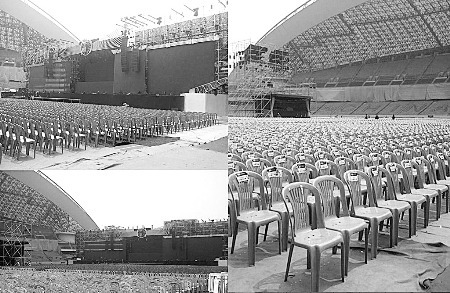 The stage at the venue had been completed. The reporter found out that Andy spent $6 million on the stage for the magical 3D effect, even those audience seated at the last row could clearly see every action of Andy. Despite the hot weather, his dancers were seen rehearsing at the venue, it can be seen of their professionalism as they wanted to perform at the best during the concert.

Andy’s manager Mr. Chan also promote the concert on his blog as he wrote: “Friends of Chongqing, are you ready? I believed that the atmosphere will be good, because we came here two years ago and know what you are capable of, thus tomorrow we shall see if you have any improvements, youngster from the 80s and 90s can also came to show their full support! Please remember to applause!”