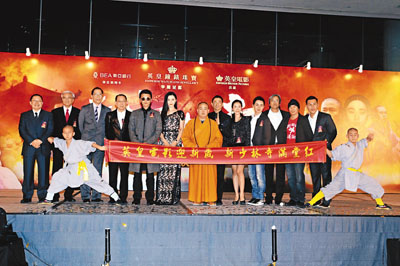 Other than wushu performance by nine monks and presentation of memorabilia, the cast also shared their experience shooting the film and participated in a ceremony wishing the film do well in the box office.

When talked about that he and partner Fan Bingbing had many fighting scenes, Andy expressed that Bingbing only had one scene that required her to fight which is the scene of saving their daughter, he said: “I feel that she put in all efforts, till now still have the chance to really watch how she fight.” With regards to this, Bingbing said: “I’m in-charge of the drama, mainly to protect my daughter and love relationship with Andy, it would easily moved people, I also teared after watching.”

When asked about the competition with the films screening at the same period, Andy hope that the box office takings will be the same as in Mainland China, but never thought of defeating any films because Shaolin is about Buddhism which is not fighting for win or lose.