What Woman Want, a film collaboration between Andy Lau and Gong Li would opened in the cinema on 3 February, Andy sang an English song titled Slip Away for Gong Li, footage of the film were edited into a music video which allowed their love story to reach great heights.

Director Chen Daming expressed: “It happened that Andy had not sing any English songs for the past few years, thus the song Slip Away will give people a refreshing feeling.” Andy always has high requirements for his works, but he was satisfied after hearing the demo of Slip Away, Chen said: “He loved the song after listening to the demo, he did not made any changes to the lyrics, his music production team also gave support and suggestion, in the end the song became a lovely love song.”

Andy also love the song as he expressed: “It’s been a long time that I sing an English song, this song is rather special, it’s different with my past songs, English song’s lyrics is more difficult, since I sang it in the film, hope that Miss Gong Li will like it!” With the song being the film’s theme song and included in the film, Andy described the song as “50% realistic 50% meaningful”, he said: “This song has the secret hidden inside my heart, really wanted to tell Gong Li my feelings, apologize to her, but just could not have the courage, thus this song is written for her.” The line among the lyrics that he loved is: “If I could I would change yesterday I would listen to my heart.” 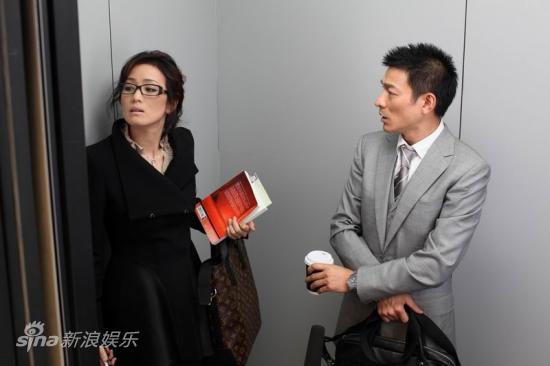 The film is adapted from a Hollywood film and the cast is full of beauties, as the main figure around the beauties, Andy exclaimed that he was pressurize about able to listen to the beauties’ feelings: “When you understand what the women are thinking, everything would become easy but it comes with huge pressure, you’ll feel bad as though you stole something from others.” With all sorts of beauties surrounding Andy in the film, but his character only has Gong Li in his heart, he said: “After hearing to so many ladies’ thinking, in the end still feel that Gong Li’s character has talent, she beautiful and sincere, I love the chemistry working with her.”