Initially Andy is a cruel and violent general named Hou Jie, he had a daughter with wife Fan Bingbing in a blissful family. After Andy and Nicholas Tse successfully win a war, Nicholas was tempted by his brother and betrayed Andy, furthermore wanted to kill him. 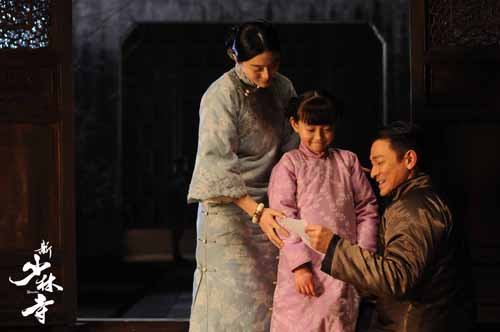 Therefore on the left side of the map shows the love-hate relationship of Andy before entering monk-hood, with regards to this Andy explained that it show the process of Hou Jie transforming from a demon to a normal person, “His consideration are how to protect his family and his property, his philosophy was ‘if you hit me, I would have to kill you’, it’s because that you hit me today, I’ll hit you the next day, thus if you’re not dead, I wil not have good days. He’s scared internally, thus always suspicious of others and lack of security. Losing everything, he suddenly became a normal person.” 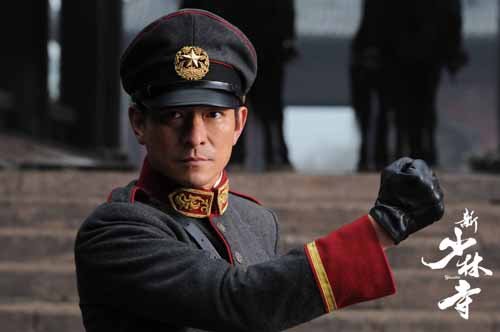 In Shaolin, after losing his wife and daughter, Andy was enlighten by Jackie Chan and decided to forgo everything to become a monk as he only practice kungfu and chant everyday, together with the monks of Shaolin Temple to save the peasants.

Andy put a lot of efforts into the character as he exclaimed he loved the extreme changes of the character, “His character has a huge changes, full of inner feelings and relationships, acting out the process of from demon to Buddha.”

Meanwhile the theme song – Wu (Enlightenment) sang by Andy which has won praise released its official music video. The video chose to narrate Andy’s life from the moment of him deciding to shave his hair off. From a general who love war and bullied the peasants to falling into the trap by vice general Nicholas Tse which leads to losing his wife and daughter. With a broken family, he broke into tears and decided to become a monk after gaining enlightenment. He exclaimed at the end of the video: “I need to understand and think, then I will feel easy and free.”

When interviewed, he said: “I always wish to be cast in a film related to Shaolin, I kept discussing the script with the director during shooting in hope that everybody can understand Shaolin kungfu and sutra.” He also expressed that shaving his head and spent months learning kungfu is worth it. He hope that everybody could accept his brave attempt in this “extreme challenge of good and evil”.

After watching the music video, director Benny Chan expressed thanks to Andy: “Being in showbiz for 30 years, Andy’s experience will allow him to get on hold to this character Hou Jie. The song represent Andy and Hou Jie’s outlook and enlightenment into life and Buddhism. Both of them can communicate with each other in many areas, thus I have to thank Andy again.”