After Detective Dee and the Mystery of Phantom Flame had opened in major cities, other than becoming the box office champion in Mainland China over the National Day holidays, it also gained the support from audience in Hong Kong, Taiwan and Korea. 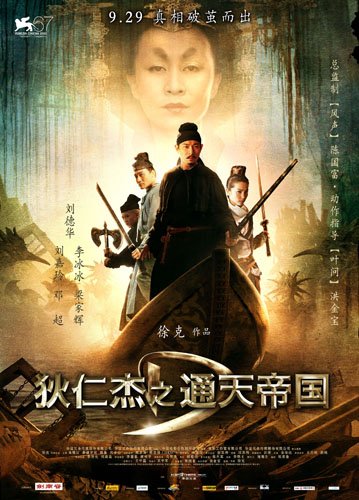 According to figures from Huayi Brothers till 11 October 2100 hours, the box office taking in Mainland China had exceeded 230 million yuan, the total box office taking throughout Asia had accumulated to 260 million yuan! The film had good box office takings created this “detective dee” phenomenon. The Korean media quoted that this phenomenon is created by its’ niche movie production, good reviews and strong promotion, its suggest that the local filmmakers follow its footsteps.

When a survey done with 8000 audience, Detective Dee and the Mystery of Phantom Flame gained 90% satisfaction from the audience, it can be considered as a new high record for Chinese film.

Other than the box office takings and good reviews in this “detective dee” phenomenon, it also triggers the audience’s interest in history, the novel Celebrated Cases of Judge Dee (originally Dee Goong An) by Dutch writer Robert Hans van Gulik caught readers’ attention once again. The phenomenon also made “tang dynasty”, “Wu Zhetian” to become the highly search keywords in the Internet, even property agents used the film’s characters to describe the competition in property market in an Internet article.

In Taiwan, other than becoming the box office champion, it also triggered many discussion in the Internet, from acting, action scenes, visual effects to the story, nothing has been missed out, some audience even sing praise that the special effects can be compared to Hollywood films like The Mummy and Lord of the Rings.