Andy had different experiences in his singing and acting career. He talked about in those many years back, TVB gave him supporting roles instead of leading roles, he destroy props in the studio and played “you can’t find me” missing game for 2 weeks thus he was put into cold storage for 9 months, he blamed himself for his childish actions as he does not know the authority of the TV station has. When talked about movies, he only collaborated with director Wong Kar Wai twice and never collaborate with him again, he explained that he lacked security when collaborating with Wong Kar Wai. He blamed himself being not a natural born actor as he could not grabbed hold of feelings thus would not know what next step Wong would make. He said: “I hate myself for not able to grabbed hold the feeling of time, I’m not a natural born actor, my acting improves with hard work and help, thus I need script to get myself prepared, I’m afraid of those what’s the next step atmosphere.”

He revealed that he once told Wong: “You can look for me to collaborate if one day you would to change your style.”

With regards to him absent in Commercial Radio music award ceremonies for 10 years, he was given disdainful look by other singers’ fans, thus leave him a bad impression, to prevent his fans from getting embarrassed when attending the ceremonies to support him, he rather absent himself. He quipped that he was not as strong as everybody thinks, actually he’s very weak. 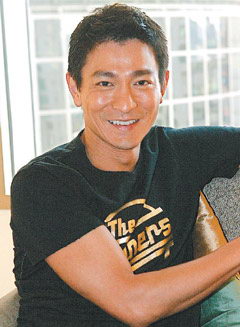 The reporter of Taiwan’s Apple Daily News called Andy’s management company to rectify the allegations of Andy getting married. In the past, the comapny gave firm answers like “Impossible!”, “No answer!”, however this time round they gave the answer: “How did you get to know about this?” and “This is private matters of artiste…”, they have reservations instead of denying the allegation.