During the premiere and press conference of Detective Dee and the Mystery of Phantom Flame in Shanghai, Andy Lau, Li Bingbing and Deng Chao complained that the shooting action scenes at the Ghost Market is difficult due to the shooting surrounding because the Ghost Market is set up in a mine cave with tons of water added, many wires were installed for the ease of shooting flying movements. Sammo Hung took 16 hours to shoot a scene thus making a record.

Recalling the shooting, Li Bingbing still has deep impression, “I was fighting with Andy while wearing a 30kg costume, I already have phobia before shooting, if I’m not fighting him the costume would have weight me down, this is so unforgettable. Luckily the shooting of the scene took only 2 days, I kept thinking: I take up the challenge, no choice, if I don’t work hard I can’t go back to sleep, at the end I can’t feel much of the weight anymore.”

Li Bingbing started to embarrass as she continues: “Due to the difficulties of the fighting, I would accidentally hit myself and him during shooting, luckily he’s forgiving making me feel comfortable. But in the end, when I start to practice, Andy would shout out – be careful, Bingbing is practicing, go hide.” Looking at Andy, she said: “I’m sorry that I hurt you!” With regards to this, Andy does not mind as he said: “No issue, you need hit me badly, hope we could fight again.” A more relaxed Li Bingbing exclaimed that “hitting represent care, scolding represent love”. Andy burst into laughter and quipped: “She loved me so much, no wonder she hit me so hard.”

As expected, the intimate scene between Andy and Li Bingbing became the media focus, Andy sing praise of Li Bingbing’s performance, he exclaimed that during the shooting of intimate scene, the actor will have more pressure when compared to actress, however Bingbing was very open and could feel that she’s relax when shooting start, thus he’s not pressurize: “When I looked at her, she’s very natural, I don’t feel anything erotic. I had no choice but to look at her, not looking at her in the eyes and nowhere to look at, therefore for that scene, it’s thoroughly eyes communication.”

Earlier, it was reported that Andy is currently tailoring a film’s script for Li Bingbing, it would be a modern love comedy similar to Look For A Star. With regards to this, Andy clarify: “This saying is too much, not such matter, I’m just saying that I wish to write a similar script.” Li Bingbing expressed: “I watched too many Andy Lau films, I loved Look For A Star, when I first met him, I told him: Excuse me, can I hug you?, I admired his acting in the film, hope could collaborate in similar film.” 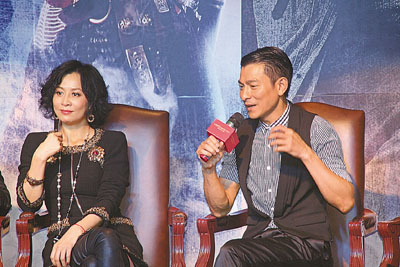 When talked about remarks that the Hong Kong film industry is “dead”, Andy was asked how he looked at the current status of Hong Kong film industry, he think that it’s not dead but rather undergoing changes, “Hong Kong films are working on the Mainland China market, thus some changes need to done.” Andy said that he think that Hong Kong films could become the left or right hand of Chinese film, this does not represent that it’s dead, because it had become a part of a giant. With regards to Hong Kong directors targeting Mainland China market, would they suffer loss in box office takings as they could not adapt well? Andy quote an example of a cook from Beijing working in Shanghai, he surely need to change his way of cooking, “There would be one or few directors would or would not adapt well, this is normal.”