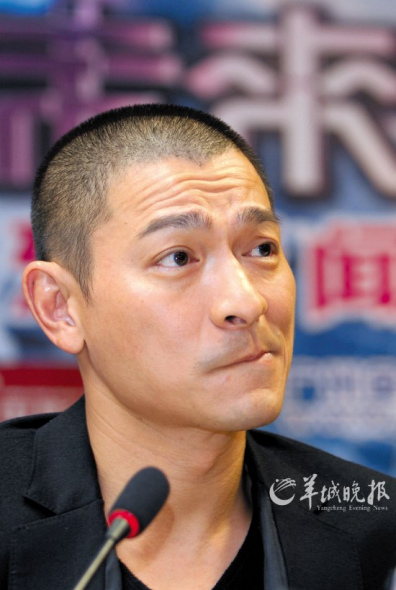 The media kept asking Andy for his opinion on Charlene’s incident as he gave his answer. He does not agree to Charlene’s saying of “there shall be no privacy for artistes”, he felt that she should not have said this because “everybody should have their own privacy and do their best to protect their privacy”. When Wong Jing said that everybody had been “wrote to death” by the media, Andy replied: “I’m not scared, I hope that other artistes would also not be afraid.”

Andy seems to be in high spirit as he appeared relaxed during the interviews. He whom also always tried to maintain his perfect image in front of the media made jokes out of himself as he said: “I’ll treat all fans as my daughter, hope that they don’t treat me as their father.”

Another Wong Jing film Beauty on Duty will also open in the cinema on the same day with Future X-cops, despite being the press conference of Future X-cops, Charlene became the focus despite not one of the cast for Future X-cops. When reporters asked Wong Jing if he’s worried that the news of Charlene’s divorce would affect the box office taking of Beauty on Duty, he’s not worried: “There’s a possibility if it’s a romance film, it won’t as it’s a comedy.”

With regards to whether this incident would tarnish the image of Charlene, Wong Jing’s answer appeared that he’s “angry”, he said: “Whose image is not tarnish by the media nowadays, everybody had been given the death sentence. Even a person like me whom does not drink nor smoke had people writing about me. I feel that artiste getting married need not tell everybody, not required.”

Andy whom experience this last year has no comments, when asked of his opinion on this matter, he initially said that he had nothing to say then he said: “I think…..” before continue “Forget it, I better not say anything.”

With regards to the media gave artistes death sentence with their writings, Andy had his own thinking, he think that “currently nobody could not escape criticism, other than Xu Jiao, wrong she was written to be out fashion and lack of childhood”, but he added that the audience does not sure like to know about the gossips and private life of artiste, only the media think that these reports would boost their sales. “Most of the time, only 50% of such reports are true. It doesn’t matter, I’m not afraid, I hope the other artistes are not afraid too, if our image is so easily given the death sentence by their writings, we shall go home to reflect ourselves.”

Being the role model in showbiz, Andy’s hard work is for all to see. Being popular for 30 years, everybody tipped him to continue his popularity. Wong Jing said: “Andy always has self awareness, some people just kept on doing, he will stop sometimes and see if he done anything wrong and see everybody’s reaction, if everyone is tired of what he’s doing, he will change and do something new. His willingness to suffer is top notch.”

During the press conference, Andy expressed that he hoped that some actresses like Maggie Cheung, Cherie Chung, Roasmund Kwan to get themselves involved in movies again, not say one film per year, one film every five years will also do. He added: “Recently I would like to collaborate with Faye Wong.” 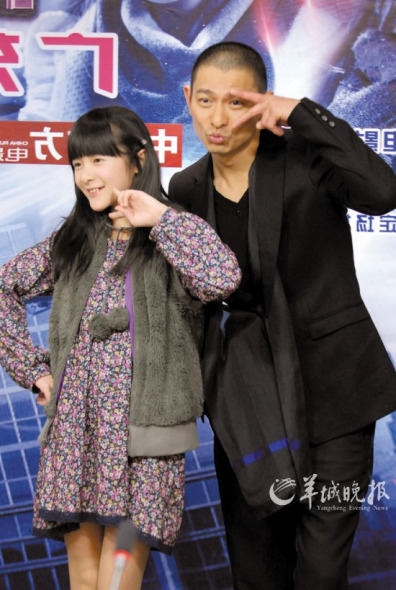 Andy whom always wanted to be a director but it did not come true. When talked about this topic, he said that he feared that he could not do the job well and being compared. “When I saw Ning Hao’s success with Crazy Stone and Jay Chou’s Secret, wah…I was shocked….” Andy said that if he become a director, he would like to shoot science fiction film followed by romance film, but he added: “I can’t find an investor, nobody would believe giving me $1.5 million could produce a good film.”

He added: “It’s not that I must be a director, only if I like. Take for example, I may love many women but I can’t marry all of them.” When asked what sort of films will attract him to invest, he explained that his standard of investing is: “Had to look at the topic and way of presentation. My aim is that it must be of some standard, if someone approach me then I’ll invest. My aim is not to be a movie’s boss, but to give people chance, thus you can see that there is seldom familiar faces hired by my company.”

Leon Lai’s Fire of Conscience will be screened at the same period as Future X-cops, when two heavenly kings collide, Andy hope that both of them would perform well, “I also hope that he do well, also don’t wish that I don’t do badly, best we do fairly well, that is on the direction of good and not bad.” According to crew members, Andy who is father of Xu Jiao in the film was very caring to her during shooting. When reporters asked if he would like to have a children who is a child actor like Xu Jiao, he answered: “Talk about this when I have children, if I have children, I hope that I will be a strict father, just hope, when I have children I’m also not sure if I can do it, I wanted to be a strict father, but when I see my friends have children, they change totally….” When asked how he act out this father role, he quipped: “I don’t need to act out, my age can be her father. Some of my fans in my fan club are younger than her, I’ll treat all of them as my daughter.” He mischievously added: “I’m afraid that they don’t treat me as father.”

When Xu Jiao was asked the difference between Andy and Stephen Chow as her father, she think for a while and answer: “Because Stephen is the director, he’s more strict as he wanted everything to be done perfect, Andy will teach me on action and expression. I love both of them.”

When asked if he think that Xu Jiao does not look like a children, Andy quipped: “She always look like a child to us, she only don’t look like a child to the media. All of you kept asking who is handsome between me and Stephen, that’s a hard question for a child to answer, can all of you just be harsh to adults.” When reporters asked Xu Jiao whether she like to watch Andy or Stephen’s movies. A mischievous Andy remind her: “Be careful of this question!” Andy then exclaimed: “I like Xu Jiao, she’s too obedient.”