The first 100 episodes idol drama Andox & Box go the direction of comedy, it would be laughter right to the end. In Mainland China’s first “imaginary idols” – Andox and Box are both performers with their own comedian characteristics, able to make one laugh till the end, there would be some ten minutes of laughter in each episode, when compared to 60 minutes non-stopping fighting in Bodyguards and Assassins, each production has its own magic works. The main direction for Andox & Box is comedy, try their best to create a relax and happy effect. Although each episode is only slightly more than 10 minutes, despite short but everything is tightly packed, in one episode, audience would continue to laugh without time to catch their breathe. 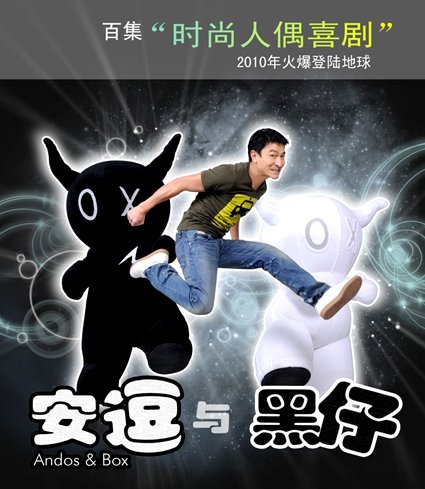 The drama has many Mainland China’s comedians cameo in it, it can be considered as a strong comedy cast. In addition, it’s first venture onto the TV screen for Andox and Box, they appeared to have strong comedian talents. Due to their outlook, and their failure to express their feelings through their eyes, they would looked a bit “silly”, however this disadvantage added the sense of comedy which exceed expectations. Their horns could express their feelings, one round eye and one cross eye, different on each side. In the drama, it can be seen that the differences between Andox and Box, one being quiet and steady, the other being mischievous, one similarity is they could dance very well and good reflexes.