Directed by Wong Jing, with a cast of Andy Lau, Barbie Hsu, Fan Bingbing, Liu Yang, Xu Jiao and other, Future Cop is currently shooting in Beijing. The film narrates Andy who is a future cop from 2085 as he tried to track down a group of assassins. The comical part is during interviews, all actresses expressed that they are fans of Andy, Andy is also smart enough to avoid this topic as he only sing praise of the young girl Xu Jiao. 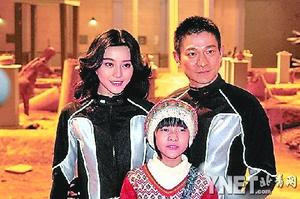 With regards to collaborating with Andy, the actresses all used “nervous” to describe their feeling. Liu Yang whom is Andy’s assistant said: “Never expected that I could collaborate with my idol, he’s simply a perfect man.” Barbie who is his wife in the movie express: “Myself and my younger sister loved Andy, when my sister heard that I’ll be collaborating with Andy, she envy me, said that she will visit me on site.” According to the movie, Andy and Barbie will have some intimate scenes, Barbie said: “When we were shooting just now, Andy put his hands on my shoulder, I almost faint, if we were to have intimate scenes, I think I would really faint.”

Other than shooting, actors also “observe” each other, Liu Yang conclusion of Andy after her “observation” is : “Andy is also to not know anything about the secular life” She told reporters: “After a few days of shooting, I feel that Andy is rather funny and full of humor in real life, he’s a big brother among us, take good care of newcomers, I heard that he would perform magic for crew members to enjoy on the set, hope he will perform magic for me.”

With regards to the actresses’ attention to him, Andy always tried to direct the media attention away as he sing praise of his daughter in the movie, Xu Jiao: “I have the most scenes with her, she’s more professional than the adults, when comparing with her, I admit defeat, take for example, no matter how cold it is during shooting, she will not say out, meanwhile adults like us always tell the director that we are going to keep ourselves warm in the vehicle.”

When asked of Andy’s ideal woman, he expressed that a woman that is able to accept the condition of an actor is a good woman, “As an actor, most of our time is shooting outside, but many women need people to accompany, therefore I love woman to be understanding, understand my job, for her character would be quiet when outside and active when at home.”

Meanwhile, the performing artistes list for the upcoming CCTV Chinese New Year gala had been revealed as rehearsal had started. Invited singers from Hong Kong and Taiwan have the choice of not attending the rehearsal. Artistes that will appear at the gala show are Jackie Chan, Jay Chou, Emil Chou, Jonathan Li, Joey Yung and Eason Chan. However, names of Andy Lau, Liu Huan, Nan Ying and Vicky Zhao Wei is not on the list, these names were previously alleged by the media that they will be performing in the gala show.