Chinese New Year movie Look For A Star which was directed by Andrew Lau will open in the cinema soon.

To promote the movie, several of its lead which includes Andy Lau, Shu Qi, Denise Ho and Dominic Lam went to Commercial Radio two nights ago to record a radio drama, the drama will be the prequel to the movie which will introduce the characters of the movie. Shu Qi had several sexy performance in the movie, but Andy exclaimed that he does not dare to look at her as he would have a heart-beating feeling when looking at her.

Andy and Shu Qi had dancing scenes in the movie, they had to learn dancing together. Andy quipped that when he’s teaching Shu Qi, he had to lied to himself that he knew how to dance. He pointed out that in the past he also used the same cheating method to cheat himself to do well in a dancing scene, this will make him do better. When asked if the clothes that Shu Qi wore in the movie is sexy, Andy quipped: “Sexy! There is a scene which narrates the female dance troupe changing, although they’re wearing skin color protection garments, but I was shocked and run away immediately, I was so scared even though there are protection garments.” Andy pointed out that Shu Qi is already very sexy, he does not dare to look at her, he would have a quick glimpse when there’s no reporters. He feel that anyone whom look at her will have a heart-beating feeling, he said: “I’m a normal person, if I don’t look and my heart don’t beat, it will not be me!” 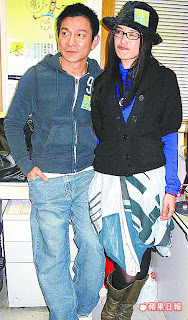 Shu Qi whom was suffering from flu quipped that her last collaboration with Andy was 7-8 years ago in The Wesley’s Mysterious File, despite being a couple, they have few scenes together, she exclaimed that she had intimate scenes with Andy in the movie, but only communication with their eyes, thus unable to satisfied the audience. There is also a bed scene in the movie, other than hugging and kissing, there’s also crying. Shu Qi exclaimed that she is happy and feel fortunate to shoot intimate scenes with Andy. She exclaimed that she did gave the director some money in hope that he would add some intimate scenes, but it didn’t happen. Reporters spotted Shu Qi wearing a pink crystal bracelet, when asked if she wanted to get into a relationship. She explains that the program need to wear red color accessories, she and Andy had a love relationship in the movie, thus need not to get into a relationship.