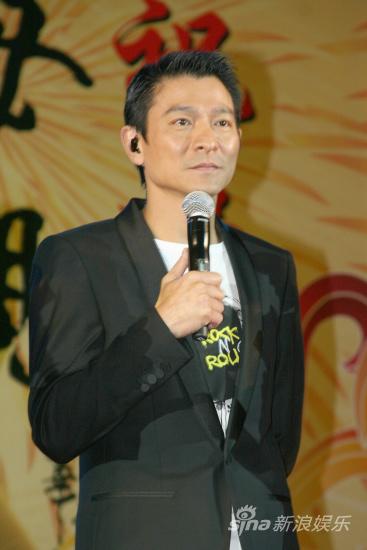 The gathering had a high atmosphere with non-stop exciting moments. The thousands seats in the sports center was full house, millions of fans also watch the live telecast of the event on the website. At the gathering, Andy sang ‘Mu Qin’, ‘Bing Yu’, ‘Wo Hen Wo Ci Xin’ and many others Cantonese and Mandarin songs. He played games to interact with the fans, he also answered questions from netizens, he even sang ‘Lai Sheng Yuan’ which was requested by online members of the website which is a surprise to the audience. Andy’s sons Andox and Box also specially came to show their mother and show off their talent, their comical performance bring the atmosphere to new heights. Under the screams and applause of the audience, Andy sang ‘Ai Ni Yi Wan Nian’ symbolize his 10,000 years love for the fans to give the gathering a complete full-stop.

As no tickets sales for this gathering, all audience had to join and download ringtones in order to win tickets, thus resulting in some black market tickets to cheat fans, thus the organizer specially enforce the distribution of tickets in order to counter fake tickets. In order for this event to go through successfully, the venue had more than 200 securities to maintain order. To prevent traffic jams to the venue, traffic police were at full force to control the traffic.Two hours before the event started, audience had entered the venue, although it was a full house, the order was maintained, many of the audience exclaimed that despite this being a fan gathering but the securities and procedures does not lose out to a concert.

This is the first fan gathering in Mainland China for Andy. When the event started, more than 20,000 fans gave Andy bouquet of flowers through the internet. When the gathering was about to end, ten thousands of fans requested for an encore. This is the largest scale fan gathering.

This fan gathering added many creative elements, fans whom could not made to the venue could watch the live telecast on China Mobile’s website and could also direct questions to their idol. This kind of interactive methods attracted the audience within and outside the venue, it was an explosive platform, the compere could only asked Andy to select the questions to answer.

Upon knowing their mother to held a large scale fan gathering in China, Andox and Box also came to show their support. Being the sons of the heavenly king, they had become the items that fans chasing after. 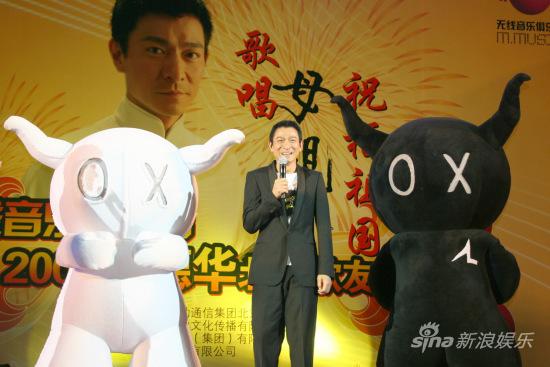 The two brothers had good chemistry, their singing and martial arts are also great as they displayed taichi and chinese kungfu. The two brothers also sang as they sang the song written by Andy – ‘Hai Kuo Tian Kong Yi Lu Shi Lan’, their exciting performance won the loud applause from the audience. As it was the 60th anniversary of Mainland China, Andy also did not forget to express his patriot by sing his latest song ‘Mu Qin’ as present to motherland. The fans also prepared 28 cushion “flowers” to symbolize Andy entering showbiz for 28 years and wish Andy could present more good songs and films to all.

Other than live telecast and allowed questions to be asked on the website, song request voting is also arranged as fans could vote for their favorite song by downloading of ringtones, the song with the highest vote will be sang by Andy. In the end, ‘Lai Sheng Yuan’ became the song that fans wanted to hear with 20,000 votes. Andy sang this classic song for the fans. 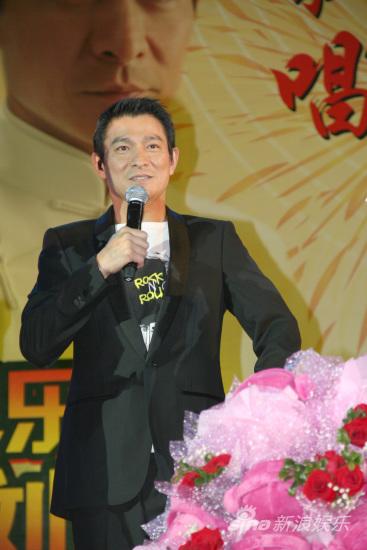 Towards the end of the gathering, Andy used an explosive song ‘wo Hen Wo Ci Xin’ to bring the atmosphere to new heights. The audience waved their light sticks to the music, it was an energetic atmosphere. With the atmosphere at a high, the audience asking for an encore, the loud cheers and 20,000 fans also wanted an encore, Andy return to the stage to sing ‘Ai Ni Yi Wan Nian’ to thanks the fans’ support and symbolize loving them 10,000 years. This draws a complete end to the gathering and Andy will return to Hong Kong to continue working.