Overheard starring Lau Ching Wah, Daniel Wu and Louis Koo was produced by the production teams of Infernal Affairs and Protégé, since it opened in the cinema on 24 July, it had managed to collect $60 million in Mainland China till 2 August, meanwhile in Hong Kong it managed to collect HK$5.3 million in its first week of screening. With good reviews from both the audience and movie critics in Mainland China and Hong Kong, it was said to be another epic film after Infernal Affairs. 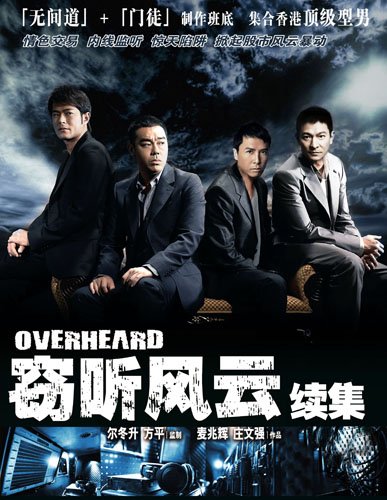 With the good results, Poly Film Investment Co. Ltd is very satisfied as it said: “The company had discussed with other investors in hope of shooting a sequel, but it would depend on the decision of the director.” Directors Felix Chong and Alan Mak said: “Thanks the investors, but we need to consider. Although there is some difficulties, but when we write Overheard, we did consider of the different situation, if we shoot a sequel, there would not be too much problems, most importantly is to perfect the story.”

At the end of the movie, the three male leads did not have good endings. thus the possibilities of the three of them appearing in the sequel made people guessing. With regards to this, Alan Mak said: “Lau Ching Wah got arrested is easy to solve, with regards to Louis and Daniel appeared dead, but who said Louis’s character is dead, if there’s a sequel, Louis’s character could return from the dead.”

During the promotion of the movie, Derek Yee once quipped that he cheated Lau Ching Wah, Louis Koo and Daniel Wu into the movie, he said: “There will be a chance, now I’m currently thinking how to “cheat” Andy Lau and Donnie Yen to join the cast.”