The shooting of Detective Dee at Hengdian is coming to an end, but the shooting of several important scenes that involved the actors are ongoing. The “golden partners” Tsui Hark and Sumo Hung request high standards for every dialogues and movements in every scenes. The shooting crew had withstand the high temperature of 40 degree celsius, working for more than 18 hours each day. When the chance of a media visit to the shooting, reporters will seize the chance to get close to this “crazy” shooting crew and the “miracles”. 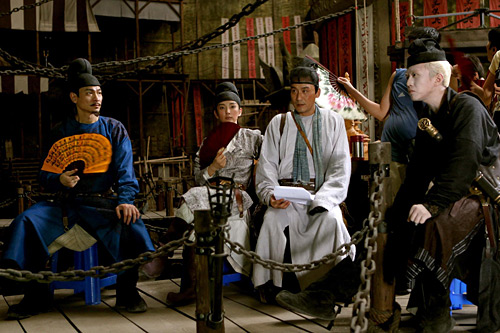 Li Bingbing whom had just finishing shooting a fighting scene met the reporters in a simple costume, the blush on her face had yet faded away. When talked about the fighting scenes, Li Bingbing became excited as she showed off her weapons which are sword and whip, she also shared her joy and sorrow when shooting fighting scenes. As the sword and whip are soft weapons, thus can easily hurt people, even with her experience of the whip in The Forbidden Kingdom, but she still suffered injuries as her swollen fingers on her right hand suffered 2 weeks ago yet to go down, she also fallen from the horse last week…but the joy of the fighting scenes cannot be experience elsewhere as the combination of dancing and kungfu is the most beautiful display. 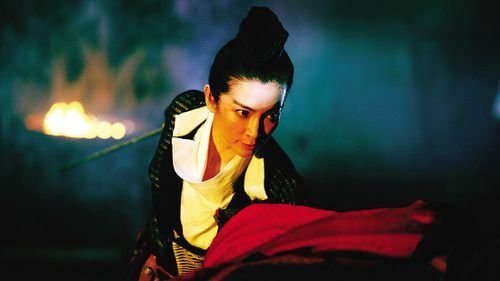 When talked about collaborating with Andy Lau for the third time, Li Bingbing thanked Andy for the concern and help from him as Andy will demo to her personally in some action scenes by teaching her step by step, he also shared his previous shooting fighting scenes experience to her.